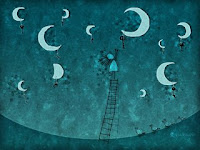 Spiritual practice goes nowhere if it follows this path. Everything gets lost in interpretation, conceptual thinking, unacknowledged prejudice and bias, etc.

In spiritual practice, we have to dispense completely with appeals to justice and fairness, precisely because they are open to interpretation and dependent on position. And if we claim access to a higher truth, we are, in effect, claiming the power and the right to decide for others.

Aside: I dislike and avoid the notion that spiritual truth is a higher truth, in terms of society and the world, etc. Spiritual practice is based on a principles that run counter to many principles of society. To claim that spiritual practice is a "higher truth" is another form of prejudice. Instead, I have to acknowledge that the principles on which I base my decisions are different from the principles that a person in a social context may base his or her decisions.

I now rarely try to persuade people to adopt a specific perspective, Buddhist or otherwise. Rather, I seek to help them find what is true for them in the world they experience. As we explore this together, appeals to justice or fairness are almost always stories that hide or protect unacknowledged hurts or pains. As they open to those pains, people frequently find clarity on their own and know what to do, not because it is "fair" or "just" or "right" (these are, in the end, somewhat childish motivations), but because, when everything, inside and out, is included in awareness, often only one course of action is indicated — the direction of the present, to use Uchiyama's phrase.
In other words, the illusion of choice is an indication of a lack of freedom.
Posted by Ken McLeod at 9:28 AM

Dear Ken - thanks for your words about karma and how that concept gets misused to project our own fantasies of fairness upon the universe. I don't know why I received this particular message from you but I am certainly in agreement with it's spirit. However, I will venture to disagree with the last part of your discussion.
I think it is another (perhaps particularly Buddhist) fantasy to imagine that right perception leads automatically to a single clear response. No amount of wisdom or enlightenment eliminates the fact that there are genuine conflicts of values in life. If I may say so, I think Buddha needs to be tempered with Isaiah Berlin! Pluralism is the acknowledgment that some differences and conflicts are irreducible: justice and mercy (for example) will always compete and there is no single unifying response that perfectly serves both. It is a particular fantasy of comprehensiveness that Buddhism is vulnerable to. In pragmatic terms, I have seen many teachers invoke their right perception as grounds for their very idiosyncratic "right" response and that course of action being treated as unassailable by others without seeming to doubt their teacher's "enlightenment." Your clear perception may indeed lead to a right response - but mine may lead to an entirely different one.
I hope in addition to being pragmatic you are also genuinely pluralistic in these matters.
gassho
Barry Magid

In spiritual practice, we have to dispense completely with appeals to justice and fairness, precisely because they are open to interpretation and dependent on position.

Yes. Moreover, appeals to values that are unique to one's own spiritual commitments are not helpful when we seek to reason together with those from other traditions. We need to be able to ground our collective decisions on public reasons.

not because it is "fair" or "just" or "right" (these are, in the end, somewhat childish motivations)

"Childish" usually implies something that is discarded with maturity. Are you critical of the view that equates justice with fairness, or do you view all of these constructs as being childish?

"When everything, inside and out, is included in awareness, often only one course of action is indicated."

I am curious... might the "one course of action" be the same for everyone, every time? Or might it vary from person to person, or even from moment to moment?

I agree with your observation about conflicts among values and your reference to Isaiah Berlin. It is precisely because of such conflicts that a person has to open to everything in their awareness, all the different values, experience the pulls and pushes in various directions, include all that they can and do know about the situation, and find, in all of that, the direction of the present. In my experience, not infrequently, the direction of the present points to missing information, and that to make a decision or to act without that information would be unwise. Perception is not limited to sensory sensations, but includes everything in our experience, including our own internal values, biases, etc.

By "childish", I meant that to base decisions and actions naively on such ideals reflects a child's wish for an ideal world.

The course of action will vary. Two people might do different things in the "same" situation, and their actions would both work, because their presence in the situation changes things. Likewise with time. An action that is right at one time may not be right at another, and situations, as you imply, change moment to moment.

I agree Ken that we must take in what normally goes unseen and unacknowledged as part of our perception
before a path of right action can emerge. This - even for a teacher - may be a slow uneven process as unconscious personal and cultural biases are brought to the surface. What we have had in many schools of Buddhism however I'm sorry to say, is an idealized fantasy of the enlightened master's immediate clarity and ability to penetrate all layers at once. This of course is nonsense -as - for instance - any woman who has worked with a male teacher will tell you.
The one sure way for a teacher not to investigate blindspots is for the tradition and the students to collude in the fantasy that the teacher doesn't have any.

Ken,
Thanks for the clarification. Of course, no one wants to do anything naively. But is a utopian view of justice always naive? The Bodhisattva vow is utopian. When J. S. Mill wrote The subjection of women, few could imagine what has been accomplished in the generations that followed.

Barry, and secondarily Ken,
I don't understand the reference to Isiah Berlin? Could one of you decribe what you mean when you say (or agree with) that "buddha needs to be tempered with Isiah Berlin'?

Ah, yes, the collusion in the infallibility of the teacher. I confess that I've been so far outside of traditional Dharma circles that I'd forgotten about this aspect and can understand how my posting might seem to be supporting such a view. In fact, I'm coming from the opposite perspective, that complete knowing, infallibility, etc. are poetic expressions and that a literal interpretation of such terms leads inevitably to catastrophes in the world. As Karen Armstrong, among others, notes, when people seek to translate poetic or mythic descriptions of spiritual truths into social reality, the results are inevitably disastrous. Or, to put it another way, when you dream becomes reality, tragedy is not far behind.

Barry will have to speak for himself. For me, Isaiah Berlin was one of the first people to point out that liberal values are not mutually compatible. One consequence is that ideal societies are unrealizable fictions. From the wikipedia entry:
"For Berlin, values are creations of mankind, rather than products of nature waiting to be discovered, though he also argued that the nature of mankind is such that certain values – for example, the importance of individual liberty – will hold true across cultures, which is part of what he meant when he called his position "objective pluralism". With his account of value pluralism, he proposed the view that moral values may be equally, or rather incommensurably, valid and yet incompatible, and may therefore come into conflict with one another in a way that admits of no resolution without reference to particular contexts of decision. When values clash, it may not be that one is more important than the other. Keeping a promise may conflict with the pursuit of truth; liberty may clash with social justice. Moral conflicts are "an intrinsic, irremovable element in human life". "These collisions of values are of the essence of what they are and what we are.""

Dear Ken,
I have read this musing at least 6 times. At first I had an aversion to your thoughts.” In spiritual practice, we have to dispense completely with appeals to justice and fairness, precisely because they are open to interpretation and dependent on position." Then I read the responses and had confusion.
Finally I feel a sense that this is just what I needed. Too long my calling card has been embossed with fairness and justice needed here.
So when you say,
"Everything gets lost in interpretation, conceptual thinking, unacknowledged prejudice and bias, etc."
I am beginning to recognize those as tools for avoidance.
So thanks once again Ken for the post.
Ellen

Hello,
There's an awful lot I very much understand and agree with here but I know I am still a bit perplexed. I'll just hang out a bit until the fog clears. Thanks for a very good topic. Like Ellen Fishman I may need to read this over a few times.

"In other words, the illusion of choice is an indication of a lack of freedom."

Words do get in the way don't they?
So when I believe I have choice I am not seeing the freedom that awareness gives (?)

I am aware that I cannot take on others' issues including their pain. The freedom then would be to
be present with their pain in ways that are not sticky
like getting tense or angry ? Being in awarenes I can not stop the pain. trade it or take it away.

Freedom would be to hold them in loving kindness then ? That is so hard to do, Ken.

Back to Unfettered Mind